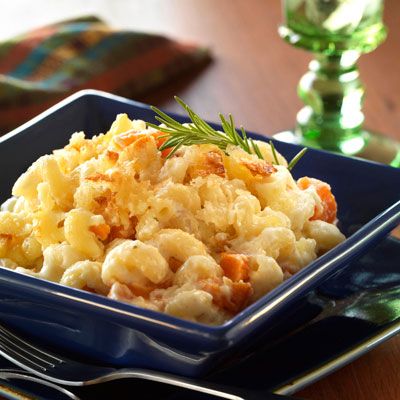 Prior to Day of Service:

Transfer to a greased 13 x 9-inch baking dish. Whisk together the eggs, the remaining 1 teaspoon of butter, and milk in a large bowl. Season with salt, pepper, and adobo seasoning. Stir in 1 cup of Cheddar cheese, 1 cup of mozzarella cheese, the broccoli mixture and half of the potato nuggets. Place macaroni into the baking dish and pour the cheese mixture over the pasta, mixing well.

Top with the remaining 1 cup of Cheddar cheese, 1 cup of mozzarella, bacon, and potato nuggets. Cover with aluminum foil. Bake in the preheated oven until golden brown, 40 to 45 minutes.

Most helpful. Cook noodles until just al dente, then drain and stir in 1 tablespoon of butter to prevent noodles from sticking together. Cook bacon, drain on a paper towel and chop into smaller pieces. Reheat mashed potatoes in a microwave safe dish. Transfer to a large bowl for mixing. If potatoes are dry, add a little milk or half and half for a smoother texture.